How To Write A SaaS Press Release & Get Featured on Tech Crunch? 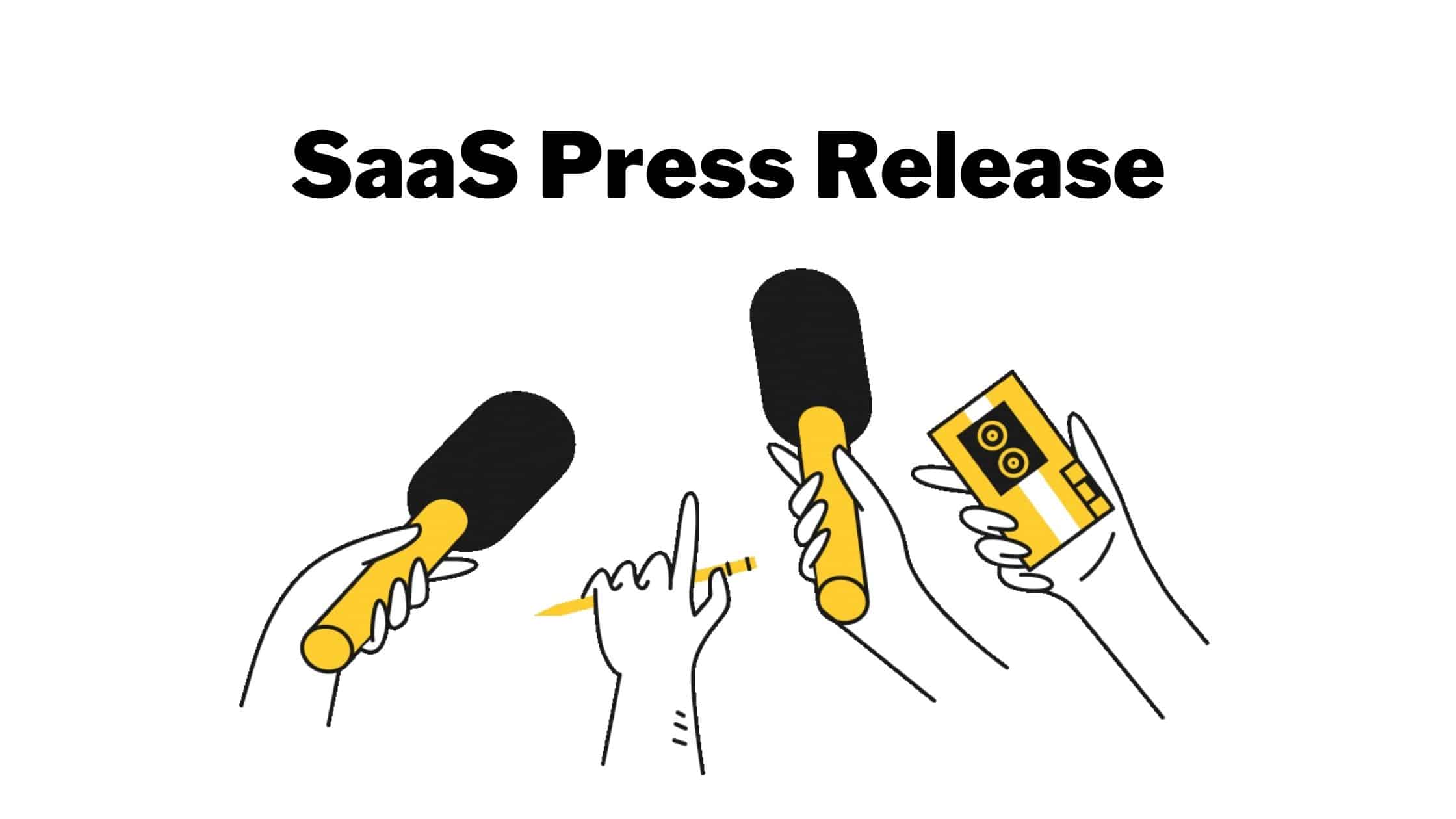 It was Friday morning. It was going to be just another normal day at work. I ate breakfast, opened my Laptop & I had a gazillion Twitter notifications / Slack messages.

Our company’s TechCrunch press release went live a couple of hours ago.

We were getting demo requests by the minute across the day. By the end of the day, we had 70 customer calls scheduled across the next 2 weeks.

We’re a 7 person startup. No PR agency. Our SaaS product is in a boring niche. So how did we get picked up by TechCrunch and 44 other media outlets?

I’m going to walk you through the EXACT steps that we follow to do a new software press release.

Why do you need a SaaS press release? What’s the objective?

It’s important to ask yourself this question – “What’s the objective of the press release?”

A lot of SaaS companies do a press release for the sake of it. I absolutely hate that.

There can be a lot of reasons why a press release is done in SaaS. But here are four of the most common reasons:

Whatever be the reason, it’s important to define what your goal is with the press release before actually going ahead with the next steps.

When is a good time to do a SaaS press release?

After speaking with a bunch of PR specialists, investors and founders, here are some useful tips to craft a good press release.

What’s in a headline in a press release? Depending how intriguing it is, it will end up deciding if:

For reporters, news is like a puzzle: they want to find the right pieces to help them tell an engaging story that will appeal to readers. If your press release’s headline doesn’t immediately pique their interest, then chances are it won’t be read. But if you can get them excited from the very first sentence, then they’ll read on to see how you present your company or product.

If you’re unsure how to write a good headline, start by asking yourself these questions:

The purpose of the press release is to get the attention of media outlets and have them run your story. And for this to happen, you need a good headline.

One of the first things that you might consider for your pitch is to ask yourself: what is the angle? Journalists receive countless press releases—they get pitched a story every day. So they need something that grabs their attention and makes them want to cover it.

An angle helps you decide what parts of your story are most important. Is it the human element? The big idea? The new developments of your story? Then you can make sure that those parts come across clearly in your pitch to the journalist.

An angle will also help you think about what kind of journalist would be best for your story—and it can even help you tailor your pitch for that particular reporter. If you’re not sure who would be most interested in your story or who covers that beat already, conducting some research on the writer’s past work could give you ideas about what kind of angles he or she might be interested in.

And if you’re unsure about how to angle a story, think back on recent news that has affected you and use that as a model: What is the thing you take away from each story? That’s your angle.

Know how to start

It’s recommended that you include your boilerplate taglin in the very first sentence of your press release. It should go something like this:

“[company name], a [company description], today announced that it has raised [X amount] in [X maturity stage] funding. The round was led by [X lead investor] and joined by [X additional investors].”

Journalists are under a lot of pressure to file on time and will read your press release quickly to get an idea of what it’s about. If your key information is buried in paragraphs 2-3, that means you’re giving them less time to write about you, which could have critical consequences for exposure.

Journalists care most about facts/data in determining whether your company is interesting.

If you include facts and data to frame your story, you’re already ahead of most people in getting the attention of journalists—since journalists largely use those elements to determine whether a story is interesting or not.

For example, if you’re announcing a new company, you could frame the problem you’re solving by saying something along the lines of “____% of people have said that ______ has been hurting them.” Then position your company as the answer by explaining why this is an important problem and how your product/service will provide a solution to it. Say something like “We’ve built ____ to solve this problem by ____.”

After addressing the problem (backed by data/statistics), position your company as the answer to a problem that many people have.

83% of Fortune 500 companies use Salesforce today to improve their sales team’s productivity. Yet sales professionals only spend 1/4th of their day *actually* selling (rest goes into general admin and paperwork).

Add your Media Kit in the press release

The media kit is a collection of all the necessary information you need to contact a journalist, blogger or get picked up by a PR agency. A well-designed media kit makes it easy for journalists to figure out what you’re about and gives them everything they need to craft an article about you.

The most important thing to include in your media kit are:

Add media contact details to the bottom of your press release so they can reach out to you with any questions they may have. This gives you extra exposure and lets journalists connect with you directly if they want more information or want to learn more about how your product works after reading through the press release.

Include relevant quotes from key stakeholders

When writing a press release, it’s important to use quotes from people that have been influential in your company’s growth. For example, if you’re releasing a new feature or update on your product, you can include quotes from customers who have already used it. This will help give the reader an idea of how they might benefit from using the new feature as well.

Similarly, if you’re releasing news about funding or an acquisition, quotes from investors and potential customers are great ways to reinforce the impact that this news has had on other organizations’ perception of your business. You should also consider including quotes from members of your team or even yourself!

The quotes can be short and sweet— here’s an example:

“We’re thrilled to have received $500K in funding from our investors,” says John Smith, founder and CEO of Example Co. “This investment will allow us to expand our product offerings and ensure that we continue to provide the best possible user experience.”

Some ideas for quotes you can include:

If you’re finding it difficult to get an initial draft of your press release, I recommend trying CopyAI to auto-write your first draft.

In fact, here’s a quick template to instruct CopyAI on the details of your press release.

Here’s how to use the template:

For example, here is how I filled the press release template in CopyAI:

…and this is the output auto-generated using CopyAI:

Amazing technology, isn’t it? CopyAI costs $49/month, but using my link, you can get it for just $29/month for your first year. It’s like having your own writing intern to write your SaaS press releases, but costs 1/50th.

*LIMITED TIME DEAL: Upgrade to a paid plan within the first 4 days of signing up using above link and get instant 40% off.

How to amplify your SaaS press release?

Most SaaS startups don’t just accidentally get covered by top media outlets like TechCrunch, Business Insider or Forbes and have a killer press release. They do it on the back of a smart SaaS PR strategy.

Disclaimer: Our content is free. When you buy through links on our site, we may earn an affiliate commission (at no additional cost to you). We only recommend products and services we’ve personally used and stand behind.